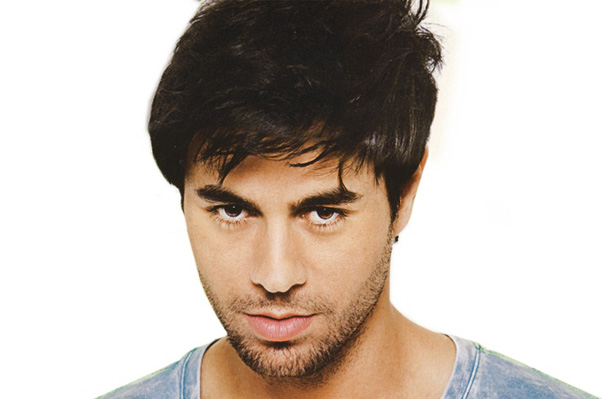 And people coming up asking for autographs, there’s only one time when it kind of bothers me: when I’m eating.

As an artist, I’ve been very fortunate.

At age 13 I fell in love with my teacher.

At the end of the day a great melody is great – but the lyrics are what make a song timeless.

Being anxious is the worst feeling in the world.

But if it’s a good song that touches people’s hearts people will come see you in concert 10 years from now just to hear you sing that song.

But I’m never going to deny where I come from. I’m Latino, and that’s obvious.

Creating a fragrance will be an exciting way to reach new fans while connecting with those people who already enjoy my music. I have always admired Tommy Hilfiger and am very excited about this new venture with Tommy Hilfiger Toiletries. (Response to his 2005 Fragrance line, ‘Blue Star Men’)

For me, it all starts with if I can sing a song with a guitar and it still sounds good acoustically, then I’ll stick it on the album.

I always respect a woman.

I can’t believe having a mole removed turned into such a big deal. Basically, all that happened was I went to the doctor, he told me it had the potential to become cancerous and said he could remove it in 30 seconds, so I told him to go for it. It’s that simple.

I care about politics just like any other citizen. I’m against the war in Iraq, or any type of war.

I don’t actually think about what kind of an album I’m going to make when I go into the studio, because that kind of limits me.

I don’t care what people say. My music’s, my music.

I don’t consider myself a sex symbol.

I don’t like being lied to, so I only lie about the stupid things. White lies, basically.

I don’t really like revealing everything about my private life.

I don’t sleep much. It takes me a long time to fall asleep. I’m a bit of an insomniac but, when I fall asleep, I don’t ever want to wake up.

I don’t think I would be a good producer, but I would like to compose for other singers, give them ideas for other projects, the problem is that I don’t compose often and I don’t have songs to give to others.

I had a normal childhood. There were women, but it wasn’t like Hefner’s Playboy Mansion. If it was, I’d still be living at home!

I just want my albums to do something different; I don’t want the prior one to sound like the new one.

I know it sounds corny, but when you follow your dreams, it happens. And if it’s music, take it seriously.

I like being underestimated. That’s what pushes me, drives me to make a great album. I keep having to prove myself. This song writing is the only thing I know how to do, the only thing I really love.

I mean, I do consider that my music is pop because I’ve been influenced by pop music my whole life; I grew up in the States and ’80s pop music was my biggest influence.

I mean, if you turn on the radio, love is 90 percent of the music.

I prefer love over sex.

I really want to fall in love.

I say that when you sing in English, it’s easier and it does open a lot more markets, but there’s exceptions, and there are artists out there that have done it in Portuguese, Spanish, and French.

I started singing with poor musicians but they were very talented.

I think it must be harder to be female than male. Apart from having to deal with period pains, pregnancy and child birth, I think women are more emotional than men. It’s not just that they find it easier to talk about emotions, I think they actually feel emotions more deeply.

I was happier before, when I lead a normal life.

I wouldn’t change anything. I’ve made mistakes, but thanks to those mistakes, I’ve learned.

I’d just finished my album and Robert Rodriguez’s people called me and asked if I want to do this movie. It was a short role, a small role in Once Upon A Time In Mexico.

If permanent happiness comes with someone, I’d leave everything.

If they would have told me when I was just 18 that I was going to have a career that would last so long, I’d have said it was impossible, that it was crazy that that could happen in my life, so I’m happy to be here. To be able to go out on stage every day.

If you come from Spain, you have to play football.

If you turn on the radio, love is 90 percent of the music.

If your buying an album because of the face on it, you’re stupid.

If you’re buying an album because of the face on it, you’re stupid.

I’m a good person, but with many defects.

I’m a person that knows what he wants.

I’m so proud of who I am and where I come from and who my father is.

In school, kids never really looked at me a different way because I think it was a different generation; they didn’t really know who my father was.

It surprises me what the girls are capable of doing for me.

I’ve gone over a million in a half miles flying.

I’ve worked a lot during the night. But I don’t sleep in the day either.

Love is one of my main inspirations.

Lyrics are crucial, but melody – it’s so much about that.

My first record contract was for three records in Spanish, and right when that was over, that was a perfect time for me to release an English album, and that’s when it all happened.

My friends support me a lot.

My inspiration are the woman, friendship, and loneliness.

My motivations are thinking I can write better songs, that the concerts can be better.

No. I can’t believe having a mole removed turned into such a big deal. Basically, all that happened was I went to the doctor, he told me it had the potential to become cancerous and said he could remove it in 30 seconds, so I told him to go for it. It’s that simple

Not that I don’t like the other songs, but I love ballads, and I think it’s always a risk-taker when you come up with a ballad.

On his split from Anna Kournikova: We’ve split. I’m single now and it’s OK. I don’t mind being single. I’m not ready for children. I don’t feel like taking on such a responsibility yet. But in the future I’d like two children.

Probably that one about me having a small penis. I think people believe I take myself more seriously than I actually do.

Realistically, English is a universal language; it’s the number one language for music and for communicating with the rest of the world.

The music promotion is what makes your face a pretty face.

The one thing about music is that there are no rules.

The one thing I’ve learned in the last ten years is that successful artists don’t get paid to write and sing songs, they get paid for the psychological roller coaster they’re going to have to ride. That’s the hard work.

The only thing I have no control over is the politics that goes on within the record company. It’s always been the same, but it’s far tougher now, because record companies are run by financial people; before, they were run by creative people.

The power of music in Spanish is so strong, that I couldn’t stay away from it any longer.

The song ‘Hero’ is a very deep and personal song. All my songs I write come from something that’s happened to me, in my life or someone I’ve met. But, I’ll never tell what they are about. It’s a secret.

The video for ‘Addicted’ was an idea of mine, and it all came together with the genius direction of Peter Berg

The way I look at it, I’d rather make my own mistakes than have people make them for me.

There are days that I wake up and I complain, and when I complain I pinch myself and say, ‘that’s for complaining.’ Not many people can do what they really like in life.

There hasn’t been one moment in my career where I felt I didn’t have any control over the creative aspects of my records.

Touring is my favorite thing to do! I love the adrenaline I feel when I’m on stage and the energy I get from my fans.

We all feel love, and that might sound kind of corny, but I really feel that’s what joins musicians together around the world.

We grow from experience. My music is always changing and in constant evolution. My first album is completely different to the last album. I just follow my own taste on music.

We’re the same blood but the singing style is different.

We’ve split. I’m single now and it’s OK. I don’t mind being single. I’m not ready for children. I don’t feel like taking on such a responsibility yet. But in the future I’d like two children.

What won’t change is always striving for that great song and that great album. That’s the challenge, that’s the fun, and that’s what will always drive me.

When I’m in love, I wake up happy.

When you do the same thing as your father… I always want it to be better than my father as a singer.

When you find the perfect person you shouldn’t feel any insecurity.

With the press, if it’s a professional interview and I feel comfortable, I don’t mind talking about my personal life.

Yes, and I hope that day I get married, it is forever.

Yes, I have made a woman cry.

You need a good production, but the essence, what makes a song timeless, is the melody, the lyric, and of course the production.

You should do whatever language you feel is the perfect language for you to sing in and then try to strive to do the best.